Fantasy presents an extremely broad scale of existing fictional characters to work with. In addition, it renders illustrators the possibility to imagine and illustrate endless numbers of fictional fairy-tale esque characters. This type of illustration can be about anything you can possibly imagine, from sirens to their fairy cousin sprites, as well as elves and dragons, among others.

What is Fantasy Artwork?

Through Fantasy art, artists are able to depict symbolism like good versus evil and deliver deep yet eloquent substance possible in only a handful of other illustration forms.

Fantasy illustration enables effectively delivering complex messages that otherwise would not have been as effective.

For example, I have been thinking about Leshy or Leshion from the popular game series The Witcher 3. The Leshy is essentially a forest creature that eliminates anyone that comes across the forest or loses his path. In the game series, many NPC’s are visible telling fairy tales that the Leshy is a spirit that protects the forest. That, to me, seems like a very clever symbolic reference to deforestation and a question; what if the forest could retaliate? Unlike science fiction, fantasy illustration is filled with such characters that deliver powerful messages with subtlety. It challenges the viewers’ imaginative potential.

Greg and Tim Hildebrant are American illustrators who found massive success pursuing their passion for illustration in fantasy and science fiction. They gained inspiration from well-known artists Norman Rockwell and Maxfield Parrish.

Their work also has hints of the illustration style of various Marvel and DC comic books as well Disney animated movies like Snow White, Pinocchio, and Fantasia. The twins are most noted for producing iconic Lord of the Rings calendar illustrations, designing Marvel and DC Comics comics, unique oil paintings for an exclusive Terry Brooks’ The Sword of Shannara, and Harry Potter illustrations for Wizards of the Coast.

The twins separated in 1981 in order to pursue individual career paths. Greg illustrated a lot of novels, including Mary Stewart’s Merlin Trilogy and The Wonderful Wizard of Oz. In addition to that, he also illustrated Aladdin, Robin Hood, Dracula, and The Phantom of the Opera. Moreover, Greg produced the cover artwork for the magazines Omni and Heavy Metal.

Tim also designed the book covers for books like The Time of the Transference and The Byworlder, while also producing illustrations for Amazing Stories magazine and calendars that were based on captivating fantasy themes like Dungeons & Dragons. The brothers were recipients of numerous awards including the Gold Medal by the Society of Illustrator 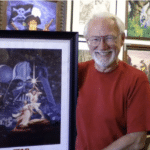 Normal Rockwell is a prolific American illustrator that has admirers all over the world. Norman Rockwell got his education and training from the National Academy of Design and Art Students League. In Art Students League, he was trained by Thomas Fogarty, George Bridgman, and Frank Vincent DuMond. From then on he went on to produce well over 4,000 artworks in his career.

He has illustrated well over 40 books for various significant personalities including presidents, activists, and actors among others. The Willie Gillis series, Rosie the Riveter, The Problem We All Live With, Saying Grace, and the Four Freedoms series were amongst Rockwell’s most well-known pieces. Rockwell’s prowess as an illustrator included illustrations for booklets, catalogues, posters especially movie advertising, sheet music, stamps, playing cards, and murals (notably “Yankee Doodle Dandy” and “God Bless the Hills,” both finished in 1936 for the Nassau Inn in Princeton, New Jersey).

With Rockwell’s assistance, a care and control facility for his original paintings and sketches was created near his home in Stockbridge, Massachusetts.

The Norman Rockwell Museum is still active all year, and exhibition curator Jesse Kowalski has worked there since 2015, overseeing the exhibits. Well over 700 classic Rockwell artworks, sketches, and studies can still be found in the museum’s collection. The Norman Rockwell Museum’s Rockwell Center for American Visual Studies is a national study organization focused on American illustration art. 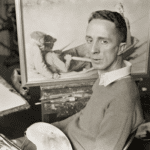 Boris Vallejo was born in Lima, Peru, and began painting at the age of 13 in 1954. He got his first illustration job three years later, at the age of 16, in 1957. Knightriders, Q, and Barbarian Queen are just a few of Vallejo’s fantasy and action film posters.

He has also designed and created posters for comedies such as National Lampoon’s Vacation, European Vacation, Nothing But Trouble, and Aqua Teen Hunger Force Colon Movie Film for Theaters.

In addition to that, he designed the Tarzan calendar for 1978. He received a five-year scholarship to the Escuela Nacional Superior Autónoma de Bellas Artes and was given a prize medal. He soon gained a cult following after coming to the United States in 1964, at the age of 23, with his paintings of Tarzan, Conan the Barbarian, Doc Savage, and various other fantasy characters.

His work was often done for paperback fiction works which incorporated such characters. This led to orders for movie original artwork, commercial art, and drawings for a variety of collectables, including Franklin Mint memorabilia, playing cards, and sculptures. Vallejo’s work is included in a yearly calendar and a number of publications.

His artwork is frequently likened to that of Frank Frazetta because of aesthetic similarities and also for the fact that Frazetta painted covers for paperbacks of several of the same characters. 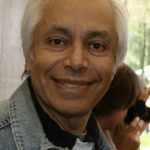 James Gurney is a world-renowned artist and author who created hundreds of artwork on various subjects. Born on 14th June 1958 in Palo Alto, he was inspired by the works of illustrators like Norman Rockwell and Howard Pyle.

He earned a BA in Anthropology with Phi Beta Kappa honors in 1979 from the University of California, Berkeley, where he studied archaeology. He subsequently spent a few semesters studying illustration at the Art Center College of Design in Pasadena, California.

Gurney began his freelance illustrating career in the 1980s, during that period he established his signature realistic depictions of strange settings, which he painted in oil employing techniques akin to those used by academic realists and Golden Age artists.

In addition to that,  designed many stamp designs for the US Postal Service, including The World of Dinosaurs in 1996, and he created well over 70 illustrations for science fiction and fantasy paperback novels.

He is most known for his illustrated book series Dinotopia, which is written in the style of a 19th-century explorer’s journal and takes place in an idyllic setting where people and dinosaurs coexist.

Gurney is a paleoartist, depicting and restoring extinct species such as avian and non-avian dinosaurs in his paintings. James Gurney resides in Rhinebeck, New York, and most recently he became the author of two art teaching books: Imaginative Realism: How to Paint What Doesn’t Exist, which is about drawing and painting things that don’t exist, and Color and Light: A Guide for the Realist Painter, which is about color and light. 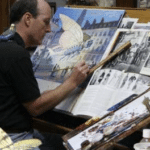 Tyler Jacobson is an amazing artist and illustrator who has had his work published in various top firms like Simon and Schuster, Entertainment Weekly, Men’s Journal, Wizards of the Coast, Rolling Stone, and many more.

Tyler Jacobson received a BA in Fine Art from Gonzaga University in 2005, and an MFA in Illustration from the Academy of Art University in San Francisco in 2009.

He was granted the Best of Show award in 2009 at an illustration event, as well as First Place MFA Traditional Illustration AAU Spring Show 2009. Due to his considerable services of art to Magic: The Gathering trading card game cards, box art, and marketing materials, along with art direction and game graphics for Dungeons & Dragons, Jacobson is best recognized as a fantasy artist.

The regular version cover for the 5th edition Dungeons & Dragons adventure module The Wild Beyond the Witchlight was created by Jacobson.

He’s also a well-known mainstream artist, having contributed to a number of well-known publications, including Texas Monthly’s oil painting Last Days of the Comanches. Moreover, Tyler Jacobson is a recipient of various numerous accolades. 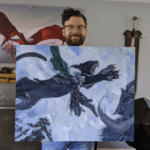 Q: What is a good site to search for an idea in fantasy illustration/animation?

A: Pinterest has a wide exhibit of pictures for you to get inspired, and similarly youtube has a lot of videos for you to explore and start creating your fantasy illustration/animation project.

Q: What is a good piece of literature based on mythology to get illustration ideas from?

A: There are plenty of fantasy books out there with vivid descriptions of characters that can help you create memorable characters. Two examples are The Fifth Season by N.K Jemisin and The Night Circus by Erin Morgenstern, both masters of storytelling.

Q: Who was Jessie Willcox Smith?

A: Born during the Golden Age of American art, Jessie Willcox Smith was an illustrator in the United States. She was regarded as one of the most gifted pure artists. During the late nineteenth and early twentieth century, she contributed to books and publications. Century, Collier’s, Leslie’s Weekly, Harper’s, McClure’s, Scribners, as well as the Ladies’ Home Journal, among others, commissioned Smith to illustrate stories and articles. From December 1917 through 1933, she had a long-running association with Good Housekeeping, including the lengthy Mother Goose series of drawings as well as the production of all of the magazine’s covers. Louisa May Alcott’s Little Women and An Old-Fashioned Girl, Henry Wadsworth Longfellow’s Evangeline, and Robert Louis Stevenson’s A Child’s Garden of Verses are amongst the more than sixty novels she has illustrated.

Q: Who is James Warhola?